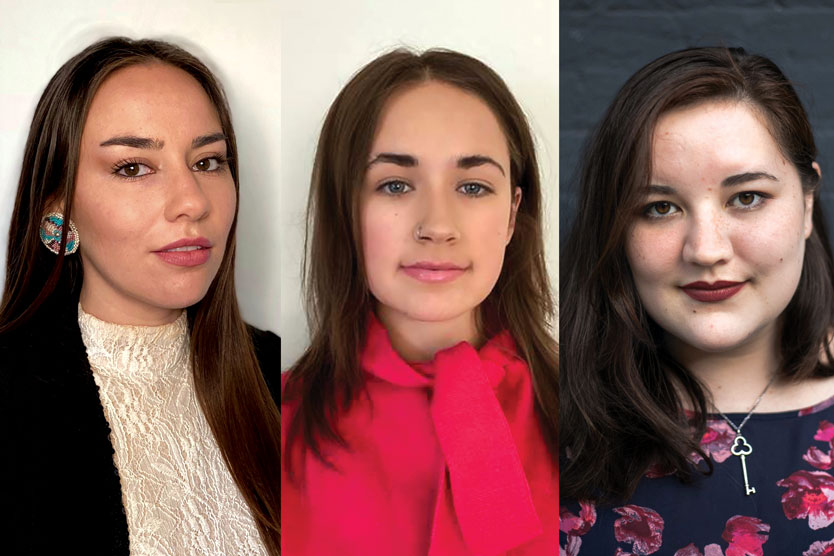 Thanks to a gift from the Federated Indians of Graton Rancheria, UCLA Law students Ashley Anderson (left), Shara Burwell (center), and Rachel Hsu (right) are the first recipients of scholarships designed to support students who want to become tribal advocates.

In 2020, the Federated Indians of Graton Rancheria in Northern California made a $15 million gift to UCLA School of Law — the largest contribution from a tribe to a law school and among the biggest from a tribe to a university in history. “This is a truly transformative gift, which will make significant and lasting impacts on the field of Indian law,“ says Professor Angela R. Riley, Director of UCLA Law’s Native Nations Law and Policy Center.

Inaugural Graton Scholars Ashley Anderson, Shara Burwell, and Rachel Hsu believe in the importance of giving back, a value they share with the Federated Indians of Graton Rancheria and UCLA Law. Anderson is concerned about the impacts of climate change on tribal lands and wants to be a lawyer to defend Indigenous and environmental rights, while Burwell, moved by the plight of murdered and missing Indigenous women, is committed to empowering women and advancing justice through economic and educational opportunity. Hsu seeks to work on cultural property issues, fighting against the erasure of Indigenous Peoples’ heritage while protecting sacred sites and cultural property.

“Tribal law is a cornerstone of Native Americans’ quest for equality and inclusion within the U.S. justice system,” says Greg Sarris ’78, Federated Indians of Graton Rancheria Tribal Chairman, who also taught at UCLA for more than a decade. “UCLA’s commitment to educating and preparing the next generation of tribal legal advocates is personally known to me, as an alumnus and former UCLA professor. We hope this gift will begin the drive for equality for our people in our native land.”

A Tradition of Influence

The Graton Scholars program bolsters UCLA’s strengths as one of the nation’s premier legal institutions to study Indian law. The first legal casebook in federal Indian law was written by UCLA Law faculty, and the school developed the first joint degree program in the country in law and American Indian studies. UCLA Law also runs the Tribal Legal Development Clinic, which gives students hands-on experience and provides tribes with free legal services, including constitution drafting and revision; tribal code development; establishment and operation of tribal court systems; and negotiation of cooperative agreements with local cities, counties and states to coordinate initiatives and services to advance tribal sovereignty and Indigenous Peoples rights to self-determination.

“For decades, Native American students and those seeking a way of serving Native Nations have come to UCLA to gain an unparalleled education in Indian law and American Indian Studies, launching them into influential careers in the field,” says Carole Goldberg, Jonathan D. Varat Distinguished Professor of Law Emerita and founding director of the Native Nations Law and Policy Center. “This exceptionally generous gift will enable the most talented and committed students to join them as powerful tribal advocates.”