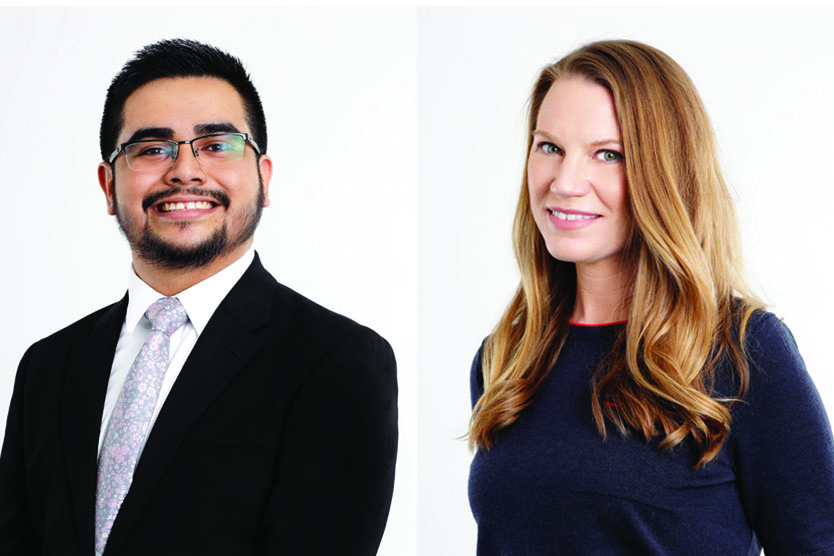 Luis Vasquez and Christy Mallory hold positions created by a gift to the Williams Institute from Eugene Kapaloski.

Many gifts demonstrate donors’ dedication to equality and justice — values they share with UCLA. And their generosity advances valuable work that helps society realize those values, too.

Eugene Kapaloski ’63 has long supported UCLA School of Law’s Williams Institute, the preeminent research center that conducts rigorous, independent research and analysis of sexual orientation and gender identity law and policy. During the Centennial Campaign, Kapaloski took the opportunity to honor his late partner of 53 years in a special way: His gifts created both the Daniel H. Renberg Law Fellow and the Daniel H. Renberg Senior Scholar of Law positions to analyze litigation, legislation, and policies affecting LGBTQ people.

“This position gives me invaluable opportunities to use my legal skills to create positive change for those facing discrimination,” says current Renberg Law Fellow Luis A. Vasquez, JD ’19. His work focuses on responding to federal policies and initiatives affecting LGBTQ individuals and people living with HIV and on examining the effects of the law on people of color, immigrants, and those targeted by criminal laws based on their LGBTQ or HIV-positive status.

Inaugural Renberg Senior Scholar Christy Mallory, JD ’08 is the institute’s legal director and spearheads its legal work on policies that affect LGBTQ people. These efforts range from non-discrimination protections and conversion therapy bans to anti-bullying policies and prohibitions on gay and trans panic defenses to criminal prosecutions. “Gene Kapaloski’s extraordinary generosity has enabled us to continue our groundbreaking research while also being nimble to respond to current policy challenges,” she says.

Case in point: In the midst of the COVID-19 pandemic in March, Mallory authored a brief on how the CARES Act stimulus package would benefit LGBTQ people. And she and other Williams Institute scholars have continued to apply their expertise to evaluating the consequences of the novel coronavirus for LGBTQ people, which has recalled the HIV/AIDS crisis for many in the LGBTQ community.

Both research positions reflect Kapaloski’s and Renberg’s commitment to equality. Beyond giving to UCLA’s Williams Institute, the couple supported the Los Angeles Gay and Lesbian Center, Lambda Legal, the ACLU, and The Advocate, and they earned the Gay, Lesbian & Straight Education Network’s Lifetime Achievement Award in 2010.

The Williams Institute, too, bears a noteworthy history and will mark its 20th anniversary in 2021. Over two decades, the institute’s research has been cited by Congress and the Supreme Court, forming the foundation of many of the most significant policy achievements benefiting the LGBTQ community — including marriage equality, advances in protections against sexual orientation and gender identity discrimination, and HIV decriminalization. The institute has produced first-of-their-kind studies on the U.S. transgender population and queer identity; explored the link between discrimination and LGBT health disparities; researched specific groups and issues, such as LGBTQ youth homelessness and incarcerated populations; and worked with community partners on the Los Angeles HIV Law and Policy Project.

Thanks to Kapaloski’s generosity and Renberg’s legacy, the Williams Institute will continue to influence and inform the most pressing policy and legal issues facing the LGBTQ community — creating a better society for us all.