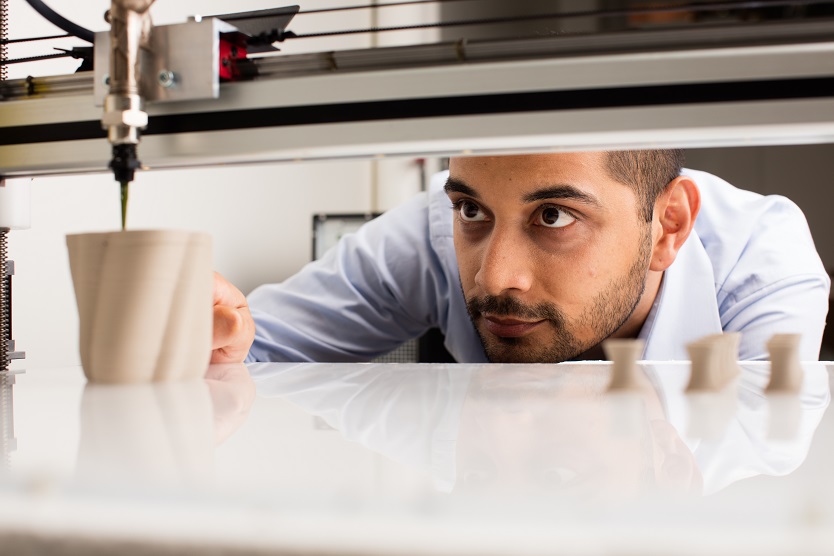 In the hands of UCLA experts, philanthropic gifts mix with public funding and industry investment to pioneer transformative innovations. A recent announcement from UCLA Samueli School of Engineering provides the perfect example.

A Grand Prize for Global Change

The technology developed by UCLA’s CarbonBuilt team is also a first, infusing carbon dioxide emissions directly from raw flue gas out of power plants and industrial facilities into a new type of concrete that absorbs the greenhouse gas. The process reduces the carbon footprint of concrete by more than 50 percent while maintaining strength and durability — a potential game-changer in the global battle against climate change.

“I am absolutely thrilled that CarbonBuilt has won the NRG COSIA Carbon XPRIZE,” says Gaurav Sant, the UCLA Samueli civil engineering professor and director of the UCLA Institute for Carbon Management. Sant led the interdisciplinary team of faculty, staff scientists, postdoctoral scholars, doctoral students, and industry advisors in the five-year global competition. “As a third-generation civil engineer, I have been fascinated with the role that construction has played in solving societal challenges. To have spent the past decade developing a solution to mitigate the carbon footprint of concrete with a phenomenal team, and to have won this XPRIZE doing something I’m passionate about, is an ultimate dream come true.”

A Team Effort All Around

Beyond the science, it also took a team approach to raise the funds needed throughout the lab tests and scaled-up demonstrations. Prior to winning the grand prize, Sant’s group raised $10 million in public and private funding, including a $1.5 million gift from the Anthony and Jeanne Pritzker Family Foundation in 2017. An enthusiastic partner, Tony Pritzker has touted his “great privilege of supporting the progress of this work,” while Sant called the Pritzkers’ gift “foundational to our success” when the team made it to the final round of competition.

Now, with an extra $7.5 million for winning the competition’s track for technologies related to coal-fired power generation, UCLA Samueli will continue advancing innovative carbon-mitigation research and technology development. And CarbonBuilt, a private company founded by Sant, has secured rights related to the project’s patent portfolio owned by UCLA, moving toward commercialization and widespread use of the technology.

“It’s a transformative, eureka moment for UCLA and for science and engineering,” says Jayathi Murthy, Ronald and Valerie Sugar Dean of UCLA Samueli. “Through sheer tenacity and determination, Gaurav and his team were able to turn a research project into an innovative technology that can solve a real societal problem and drive positive change in the world.”

To learn more about the research and testing behind this transformative technology, visit the UCLA Newsroom.

In more than 40 years of service, the UCLA Division of Geriatrics has never faced a year quite…